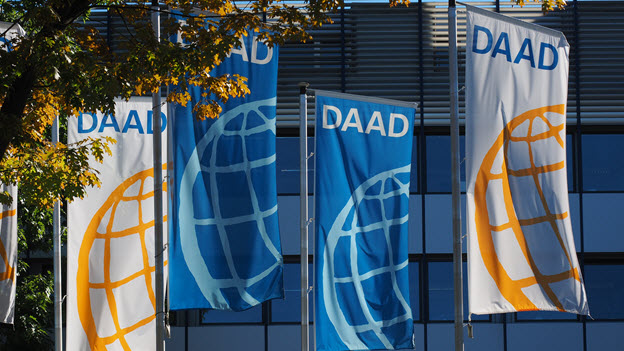 A brief look at history shows that the DAAD has a long tradition of uniting people and academia. Founded in Heidelberg in 1925 on the initiative of a single student, the DAAD has since become one of the most important funding organisations worldwide for the international exchange of students and researchers.

Since it was founded, around two million scholars in Germany and abroad have received DAAD funding. The DAAD is a registered association and its members are German institutions of higher education and student bodies. Its activities go far beyond simply awarding grants and scholarships. The DAAD supports the internationalisation of German universities, promotes German studies and the German language abroad, assists developing countries in establishing effective universities and advises decision makers on matters of cultural, education and development policy.
Its budget is derived mainly from the federal funding for various ministries, primarily the German Federal Foreign Office, but also from the European Union and a number of enterprises, organisations and foreign governments.

The DAAD on Location Worldwide

Scholarships for the Best

Providing scholarships remains the DAAD’s “core business”. In 2013 alone we were able to support 30,000 German and international students, doctoral candidates and researchers with scholarships and individual programmes. In order to serve the worldwide demand for highly qualified specialists and managers in the future, we will continue to focus on two main areas: educating young German academics at the best universities around the world, and education and training for outstanding international students, doctoral candidates and researchers here in Germany.

This second action area focuses on creating and maintaining the structures that make academic exchange and mobility possible. This includes international degree programmes, such as the new German-Egyptian master’s course in “Cultural Resource Management”, which we launched last year in Luxor, or the PROMOS programme to enhance the mobility of German students, which finances short stays for German students abroad. The “Strategic Partnerships and Thematic Networks” programme was also very much in demand last year and currently comprises partnerships with 21 institutions of higher education. As a national agency for EU mobility programmes in higher education, the DAAD played an instrumental role in 2013 in transitioning Europe’s successful Erasmus programme to the new programme generation “Erasmus +”. Model projects for the future include transnational higher education projects such as the Turkish-German University, which opened its doors in Istanbul in September 2017.

In the future, the DAAD will apply its competence and expertise even more to providing Information and advisory services to institutions of higher education and other academic exchange stakeholders, both in Germany and abroad. With its decades of experience in programme work and its unique worldwide network of 15 regional offices and 55 Information Centres, which we expanded in 2013 with new locations in Kazan and Tel Aviv, the DAAD brings tremendous knowledge of higher education systems and national science systems around the world.
Germany’s parliamentary elections and the new legislative period in 2013 also made it a crucial year for the DAAD. We were very pleased to see that the government’s 2013 coalition agreement explicitly identified the DAAD as a central driver of mobility for institutions of higher education and research, and that the German federal government wants to increase the DAAD’s capacity in this regard into the future. It was particularly encouraging to see that our goal to increase the number of foreign students in Germany to 350,000 by 2020 is also anchored in the coalition agreement.